What is Hot Luck?

It is a four day food and music festival put on by Aaron Franklin (Franklin Barbecue), James Moody (Fun Fun Fest), and Mike Thelin (Feast PDX). This year was the second edition of this fun event. Last year I helped Daniel Vaughn (Texas Monthly) with his dish at the opening event in the Franklin Barbecue parking lot. The BBQ Snob made a smoked strip steak taco using caramelized onions and Texas BBQ style chimichurri (heavy on pickles) on a Valentina's Tex-Mex BBQ's tortilla. It was freaking fantastic. I guess I did okay enough for him to invite me back to help him out this year.

For this year's opening party, DV started out by smoking butterflied pork shoulders. Once they were rested, he sliced the shoulder into pork steaks. We covered the pork steak in a BBQ/mop sauce concoction. I finished them over direct heat. It was hot AF. It was 90 degrees, and I was standing directly in the sun on an asphalt paved parking lot. After building a nice char, we cut the pork steaks into bite sizes. The sandwich comprised of the pork steak, mayo, and dill pickle jelly from Confituras on an Easy Tiger bun. This was really delicious. Maybe Vaughn should open up a restaurant? What was also cool about this event was I got to cook next to Billy Durney of Hometown BBQ in Brooklyn and Sam Jones of Skylight Inn. Seeing Sam working his whole hog magic was a sight in itself. It was a wonderful bite. The bao was also tasty. 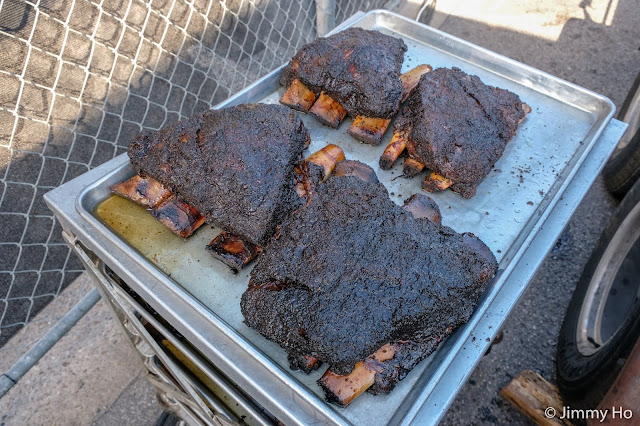 The live fire focused event has been held at The Wild Onion Ranch the past two years. It was toasty outside, but the shade made the event bearable especially once the sun set. Lots of tasty dishes and drinks were consumed. The house-made smoked "SPAM" burger by Billy Durney and the Hometown BBQ crew stood out to me. It was like eating an upscale fast foot burger ie. White Castle. It brought back good memories of my childhood. 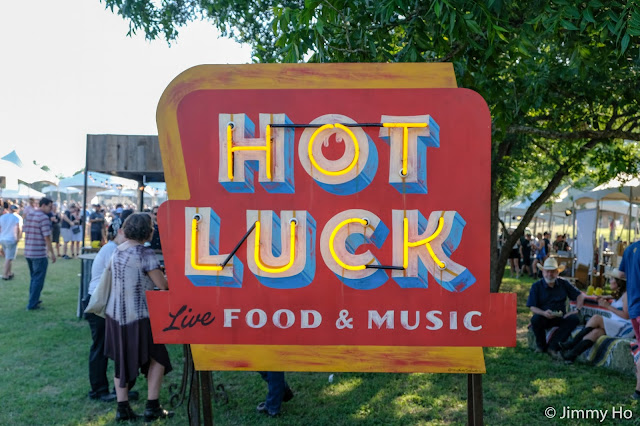 The Sunday Brunch event closed out the food portion of Hot Luck. It was held at the Austin Speed Shop (auto restoration shop). The sun was blazing on this day, but it did not stop people from indulging. Here are two dishes from your favorite Austin BBQ joints:

The Texas weather put the hot into Hot Luck. Although the temperature made it uncomfortable at times, I overall had a blast. It was fun to cook, eat, and drink with others. Amber and I have been super busy lately so we took the time to recover instead of hitting up the music events. We also went to Houston to see Justin Timberlake and missed out on Night Court (the Friday night food event). If you have not been to Hot Luck yet, start planning for next year. You will it enjoy it. I am already looking forward to the next one.